So, after 27 Level (45->72) i found finaly a new (good enough) Weapon, so i could finaly replace my Greatsword. It was a Greataxe.  6 Crafting capacity but not the golden enchant i really need. So i tried to reroll that enchant. Mats got used,  crafting capacity also, but enchant did not change.

9 sparks wasted, 3 crafting capacity wasted. It's not like i have enough sparks... 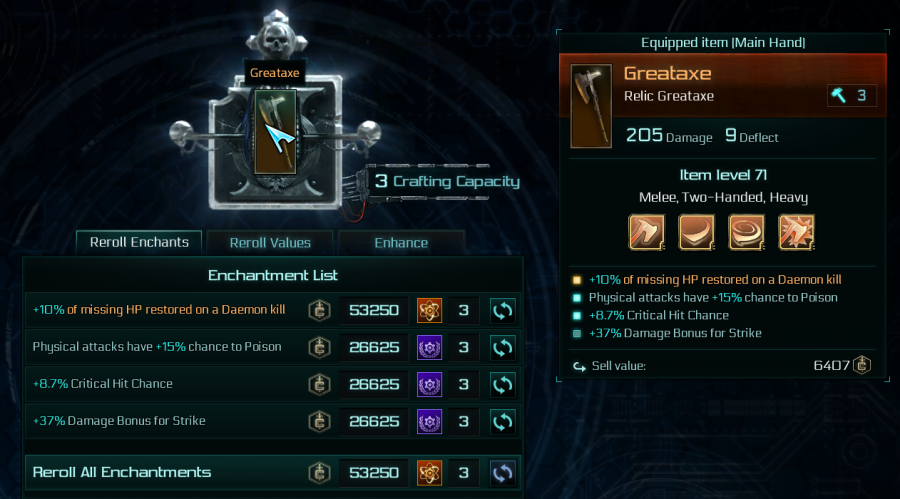 It would also nice, if you could mouseover the enchants and see to what they can be rerolled. Just take a look at Diablo 3, could be done the same.

This post was edited 3 years 88 days ago by Tubben
Comment
Store Page
Share
previous post back to community page next post
6 comments
Featured comment
Newest Oldest Best
Save This Order
Set this current order state as My default.
Order Save Options
[PC] Reforging doesent change stats.
Your Thoughts? Please login to place your opinion. Not a member yet? Register here and now!
1
virusloading
5 11
3 years 85 days ago
+0
0
Well an all items above relic has a locked ability?and with the next patch the reaches it will be an the tech tree???
1
Camato
10 36
3 years 86 days ago
+0
0
Posted by Tubben 3 years 86 days ago

But maybe you can take a look at the  GS i have equipped. Because i just cant reforge the golden enchant - the tech tree is fully unlocked.

Those cant be changed in this case, you need to reroll the whole item with the option at the bottom "reroll all enchantments"

But maybe you can take a look at the  GS i have equipped. Because i just cant reforge the golden enchant - the tech tree is fully unlocked.

Problem would be maybe, that i dont have that item anymore. I salvaged it.

Godlike
Marcopolocs
78 5352
3 years 87 days ago
+0
0
Would you please give us your account name? We will borrow your character and check on the item!