Some Bugs (and wishes).

On the Mission deployment screen, if you try to sort the missions by System Influence, the list gets sorted by systemname, and not influence. This can be seen on the picture attached. 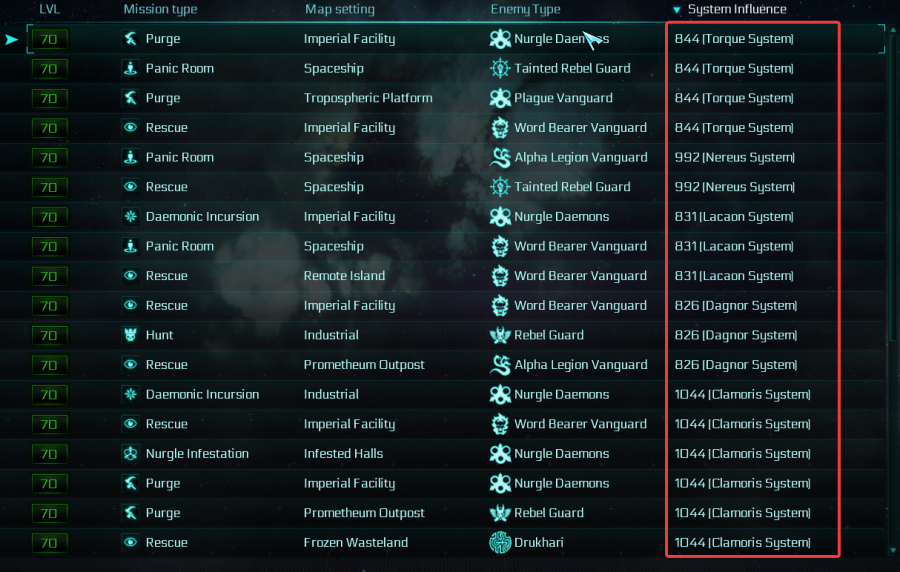 If you already have an intelmission in the bank (Lets say lv 66), and on lv 67 you get another intel Mission and put it in the bank, it gets stacked. But the  (atleast) visible level gets reduced to 66: 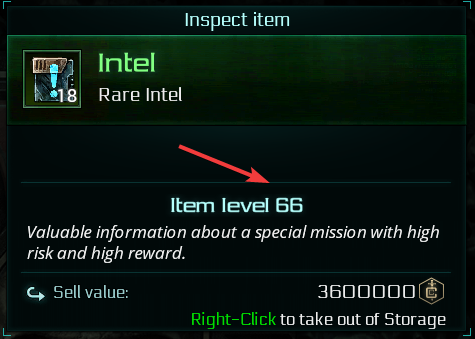 If you change under options the Floating Textsize to normal/large and accept that, then leave the game, the option get changed back to small. 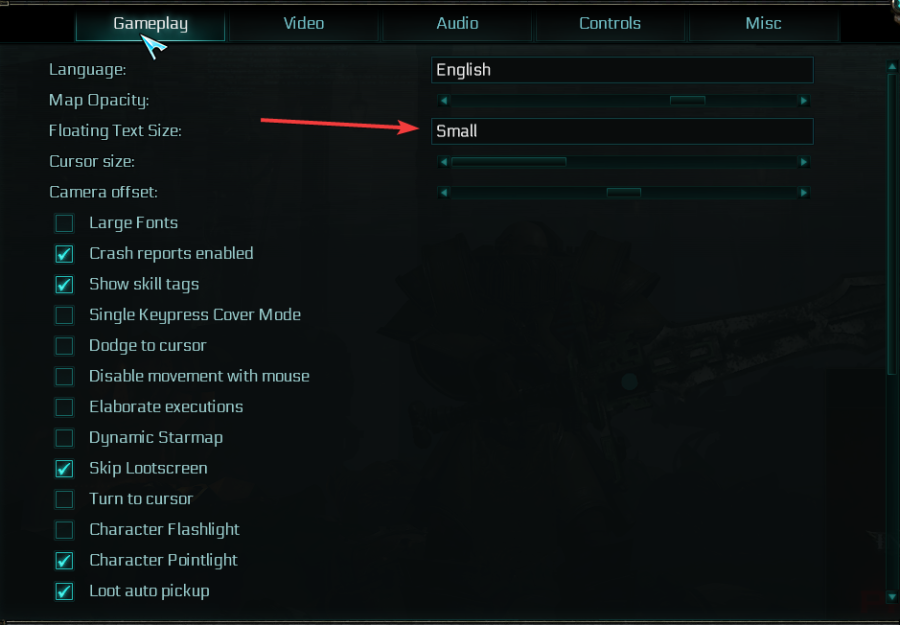 There are several things just plain wrong on the german translation. And i dont mean that an Astartes "chapter" is translated to "Kapitel", instead of "Orden", or that lots of things arent even translated but still in english (Like most Tarot cards). The translated tarotcards are just wrong.

Take a look at the card "The Crucible". First, the english one. 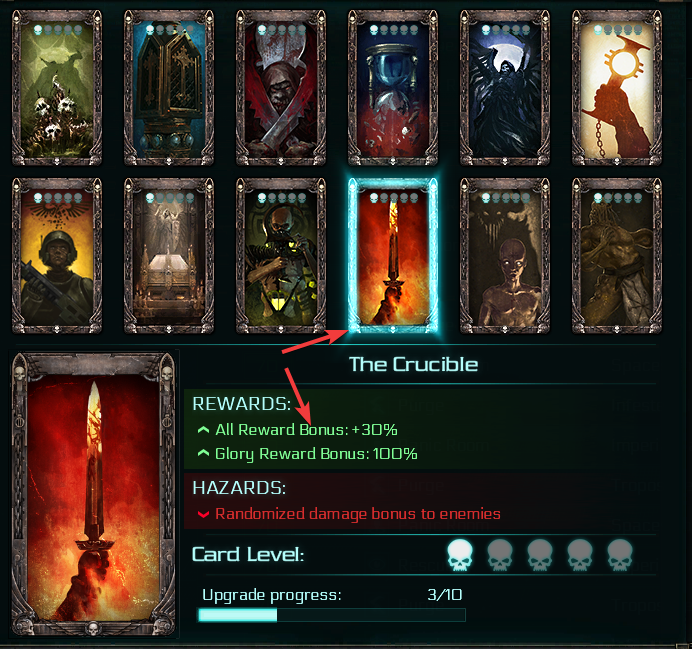 I dont need to translate that i guess :-)

Now the german one : 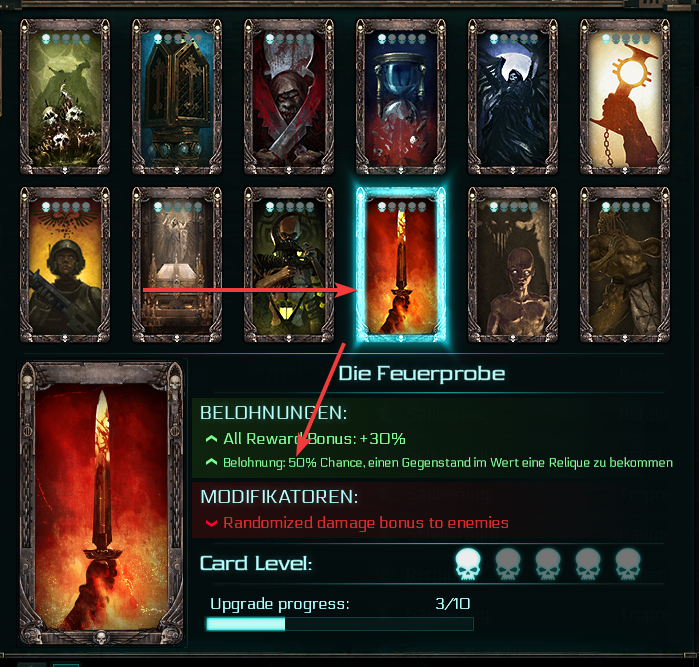 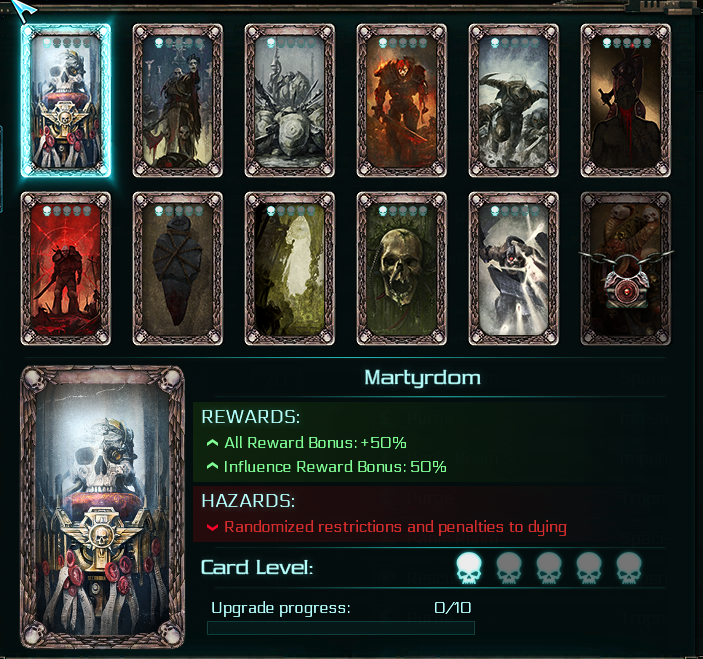 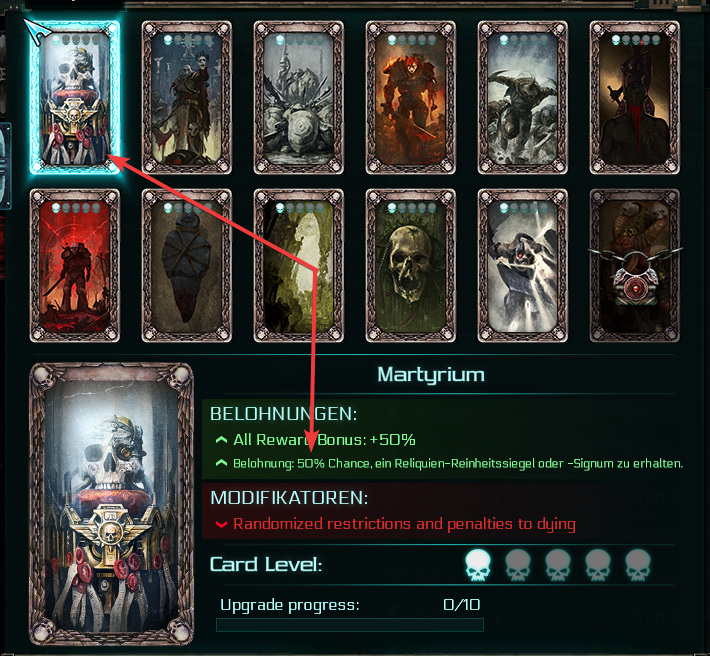 The german one says:

50% chance, to get a Relique an Purity seal or Signum

And i wondered why i never got a relique.....

Thats just one, i think EVERY german tarotcard is not correct.

I can live with some hickups during the translation, but thats mistakes which should just not happen.

Thats some bugs which just crossed my mind, now some wishes:

Wish:  If you want to craft Code/Shards you need to put them into the inventory. It would be nice if you could craft with them out of the bank.

Wish: If you want to reroll enchants, a list with possible enchants would be nice.

Wsh: On the mission deployscreen i miss the ability to filter (Like you can do in Excel). Lets say i want to see only  Rescue Missions,  with a certain Enemy type, sorted by System influence

Wish: Blue crafting materials (Blessed Alloy / Electro Fragment + Chemycal reagent) dont really have an use. I have ~9000 of each and have no use. A way to transform them into purple/golden/red materials would be nice.

Wish: I would like that i can save "Tarot Card Setups" i can apply to missions with one click, rather than picking card by card.

Wish: I want to be able to turn executes complete off, even the short ones are pretty annoying after a while, even more since buffs still ticking while you are unable to do anything.

This post was edited 3 years 88 days ago by Tubben
Comment
Store Page
Share
previous post back to community page next post
3 comments
Featured comment
Newest Oldest Best
Save This Order
Set this current order state as My default.
Order Save Options
Some Bugs (and wishes).
Your Thoughts? Please login to place your opinion. Not a member yet? Register here and now!
1
Staff Member

Godlike
Marcopolocs
78 5352
3 years 70 days ago
+0
0
Tubben
I don't know how I could miss your question. The English is the correct. The various translations will get implemented with the next patch!
1
Tubben
19 28
3 years 84 days ago
+0
0
Marcopolocs
It's not about the droprate on the tarotcard.

It's about that the english tarotcard says something COMPLETE different than the german one.

So, whats correct? English or german ?

Godlike
Marcopolocs
78 5352
3 years 84 days ago
+0
0
Thanks for the list of reports, we will check on these! The German localisation will get implemented into the game so hopefully that will resolve the misunderstanding. The drop rate should be correct.

Your various suggestions have been forwarded to our devs, they will look on them.