Updates to W40K: Inquisitor will be released. The updates will be applied automatically when your Steam client (in on-line mode) is restarted.

This post was edited 62 days ago by Marcopolocs
Comment
Store Page
Share
previous post back to community page next post
9 comments
Featured comment
Newest Oldest Best
Save This Order
Set this current order state as My default.
Order Save Options
Backend Improvements - v2.6.1 | September 8
Your Thoughts? Please login to place your opinion. Not a member yet? Register here and now!
1
Lankester
36 134
57 days ago
+0
0
Marcopolocs

As a TA, the biggest problem is constructs' AI and targeting. The AI is very dumb and basically consists of two checks: 1) get in range; 2) avoid LOS issues. I don't suppose you will look into the mobs AI, that would probably need a more substantial rework than what the game will get at this stage. However, these two conditions cause a number of problems, including constructs not attacking their target at all. 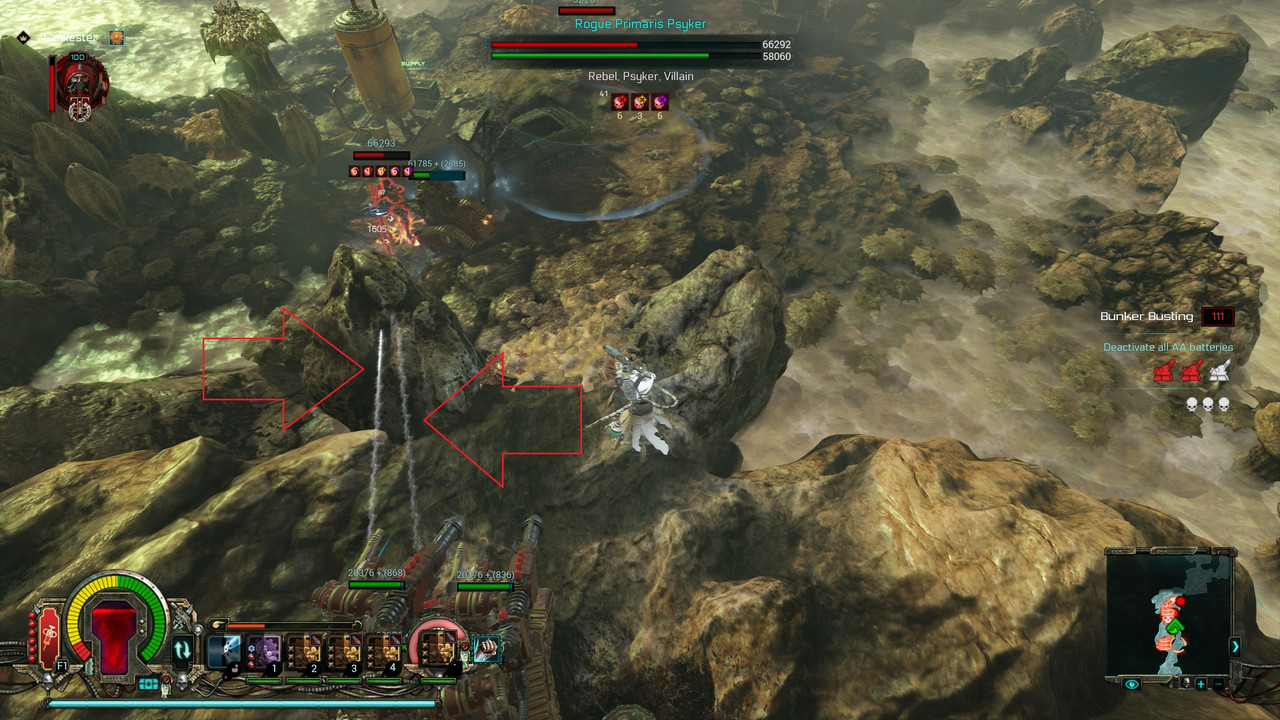 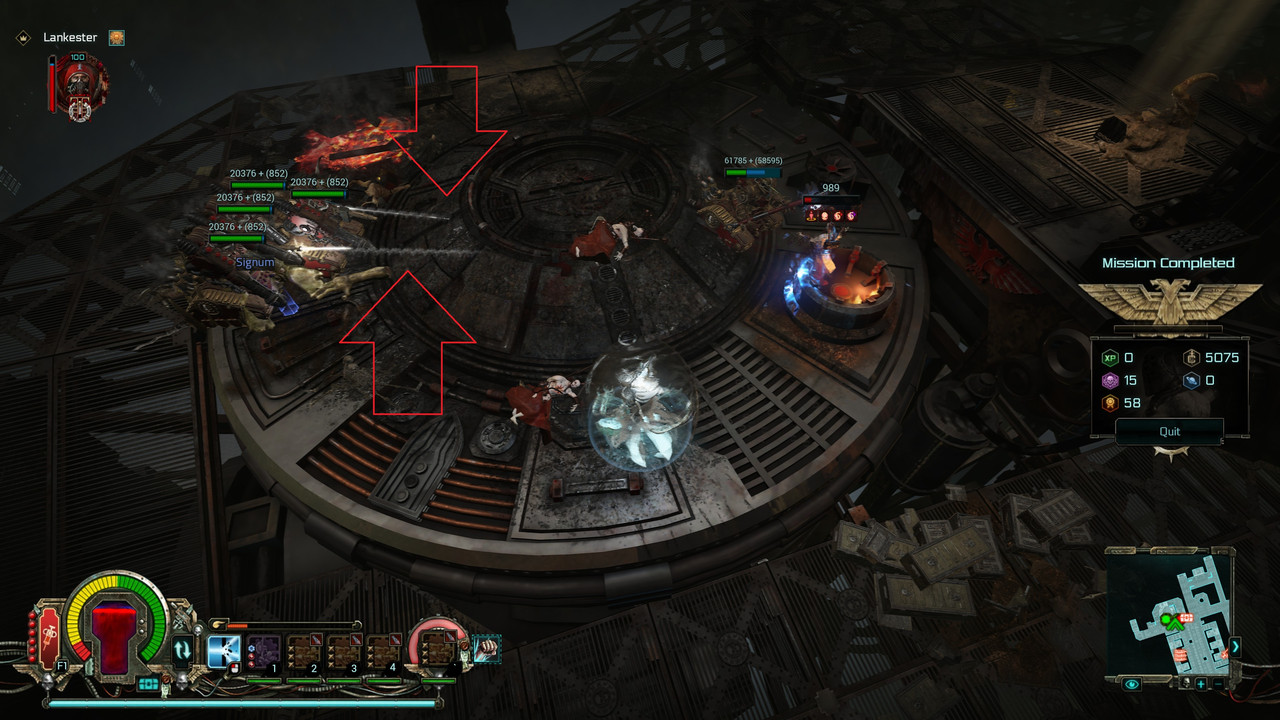 Another big issue with constructs is grav gun. They don't use it on most bosses. I use kataphron destroyers with phosphor blaster and grav-cannon and I can honestly say that in a good 3/4 of the boss fights they will completely ignore their grav-cannon and only shoot their blaster. Losing 50% of your firepower in boss fights is not exactly ideal. This mostly affects large mechanical bosses, but others are also randomly affected. It's bloody annoying. 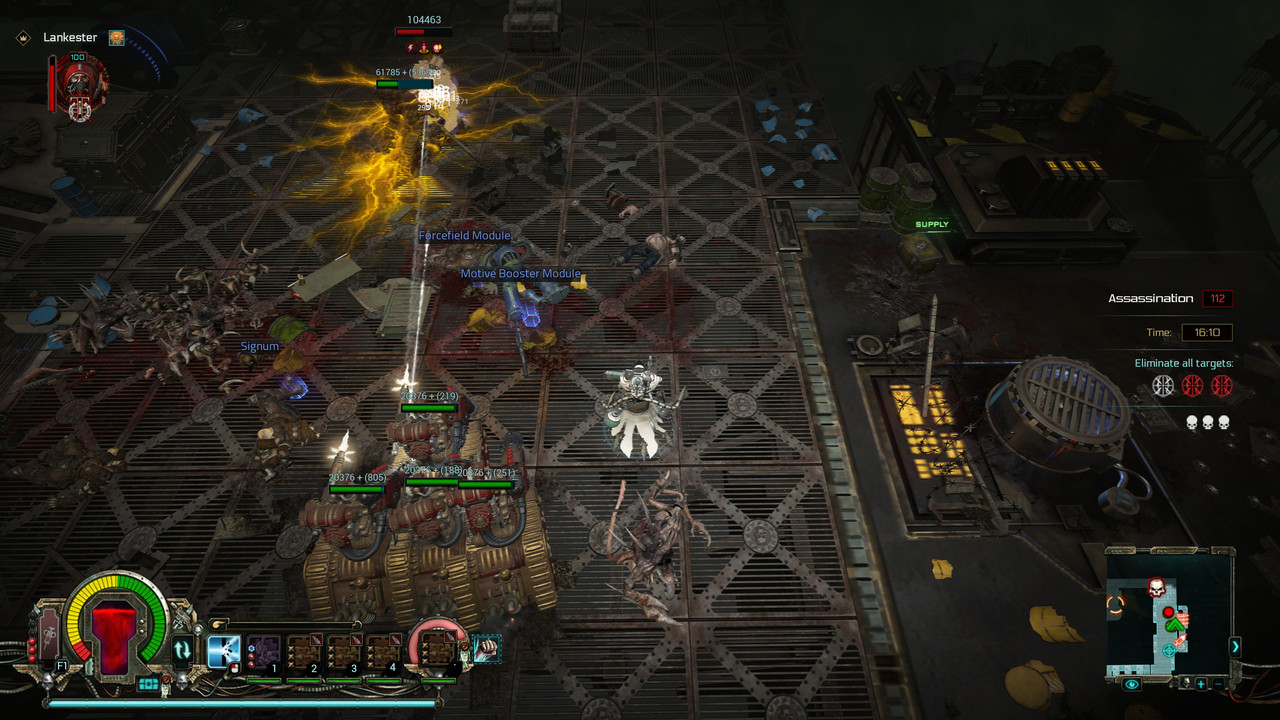 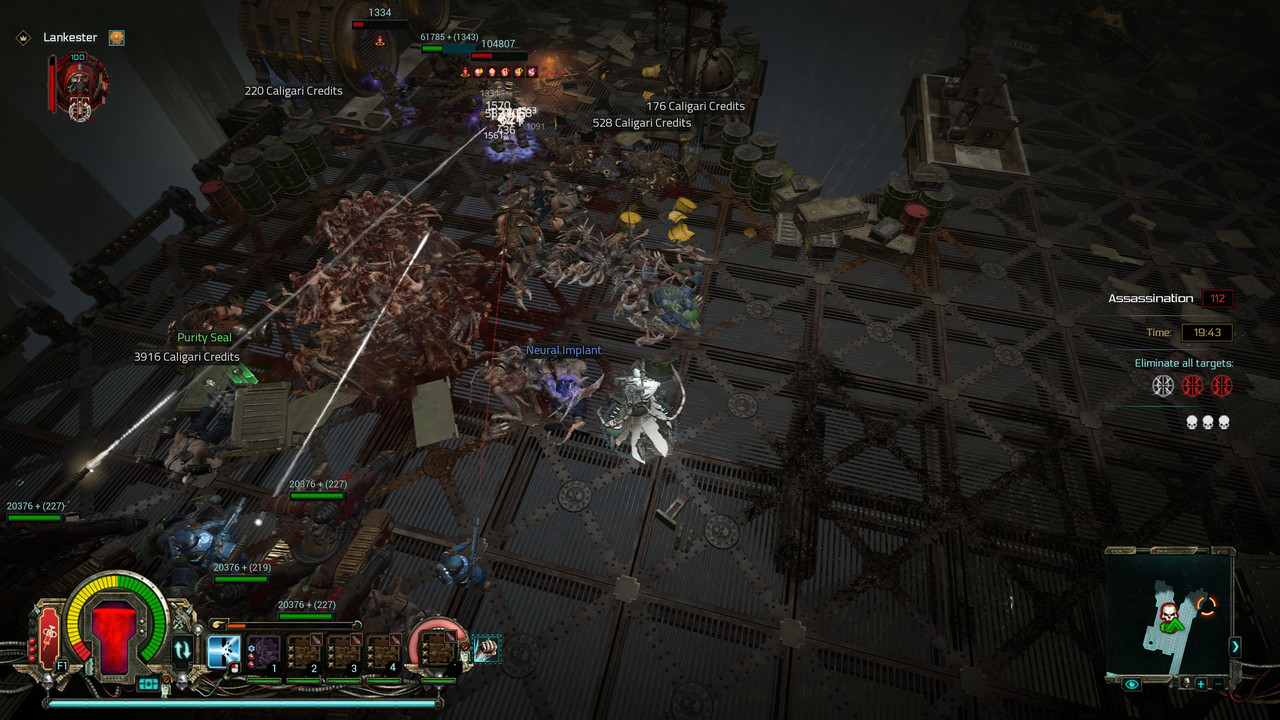 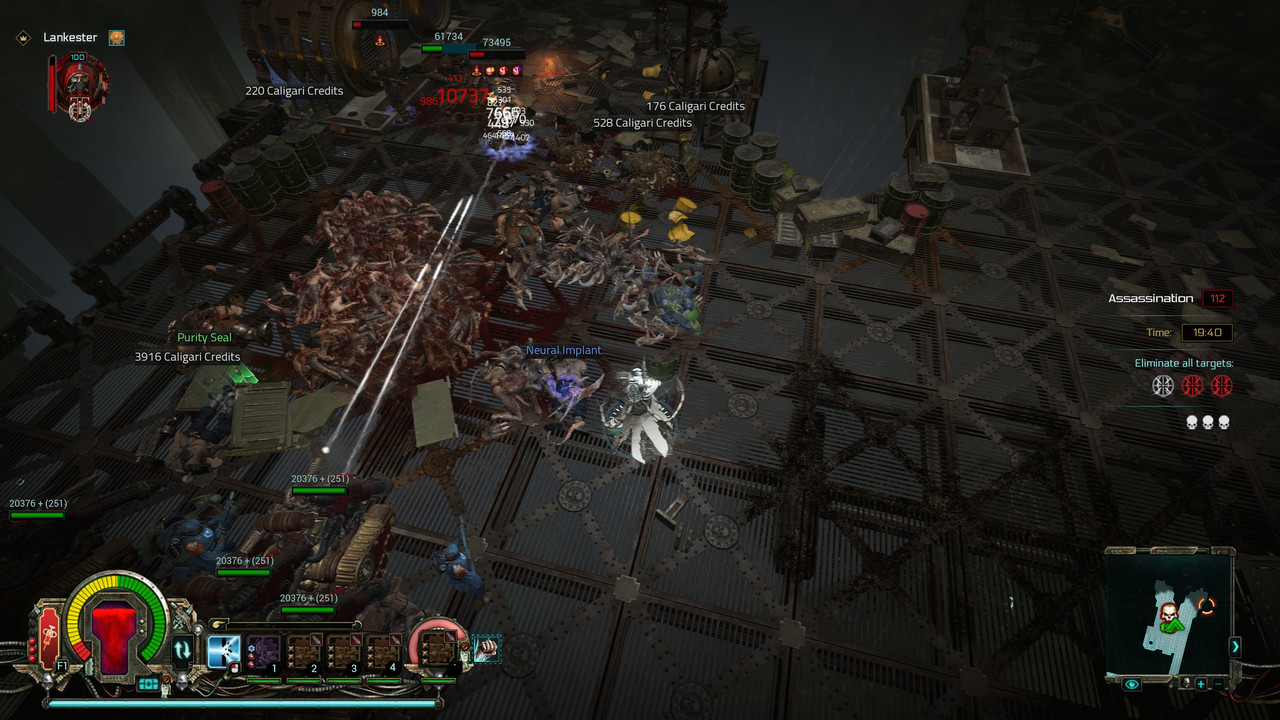 On the topic of constructs, could you please add the missing info in the Constructs Info sheet? There's a bunch of stuff missing, like constructs resistances, which makes it pretty much a complete guesswork when rolling module perks. Does my construct need that extra 50 warp resistance or not? What is their current supreme dmg reduction? It's anybody's guess.

While on the topic of resistances: for the love of god, please give the rescue targets and the panic mission targets their own scaling resistances! With their completely braindead AI, they die within second on any +10 or higher mission. And since their AI consists of 1) get in range; 2) avoid LOS issues; 3) shoot, they will happily run into a pool of s**t on the ground that ticks for 20% of their health every second and stand there without moving until they die.

A bit of a balance issue: not sure if it was intended, but currently the Demented Psyker is THE BOSS of the whole game. You can forget any big VC or seasonal bosses, they're complete pushovers. Demented Psyker will one shot all of my ranged constructs (usually all at the same time, as they tend to clump together). She needs 2-3 shots max to kill my vanguard and with good mission hazards I saw her several times one shot him. Just to give you a better idea: 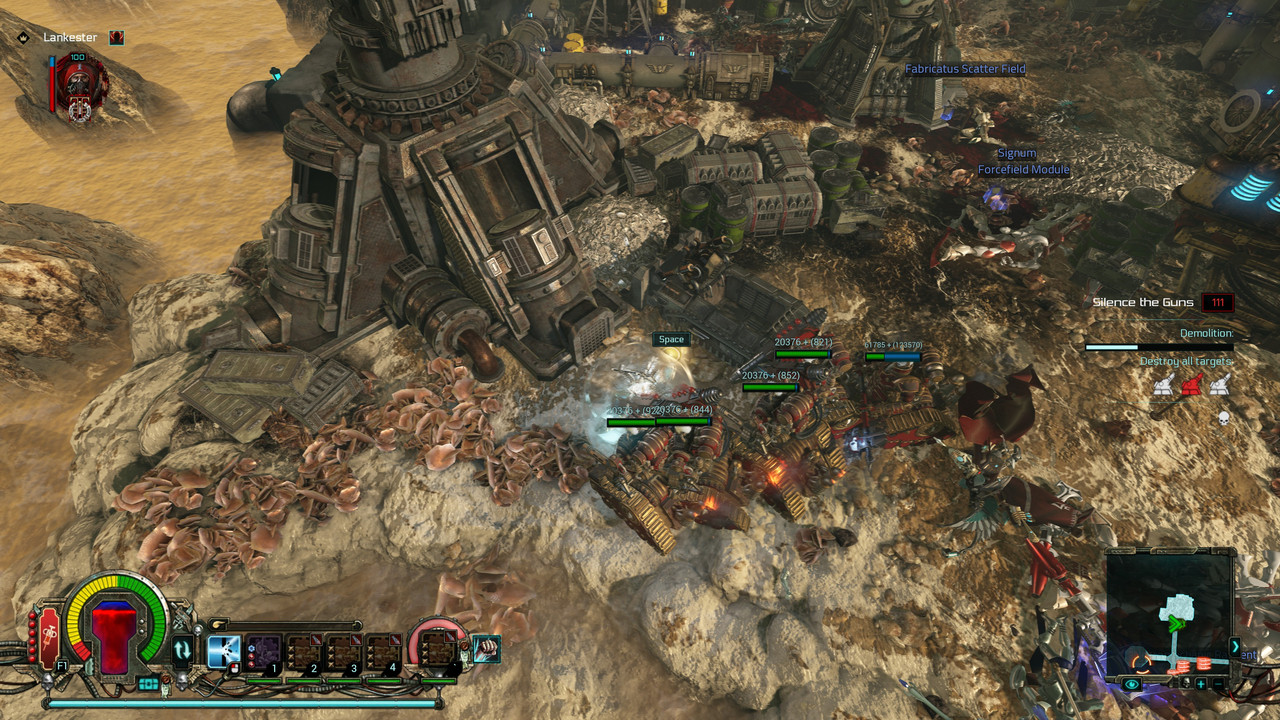 It's the dude with 62k health, 123k shield, max dmg reduction (+ a ton of supreme reduction) and a good dose of resistances. At her worst, she needs 2-3 hits to kill him. On her good day, nothing survives even one attack. I'm not sure if this insane scaling was intended, but there is no other boss in the game that comes even close to what she can do.

Changing the topic a bit: any plans to provide a credit and crafting mats dump for the game? 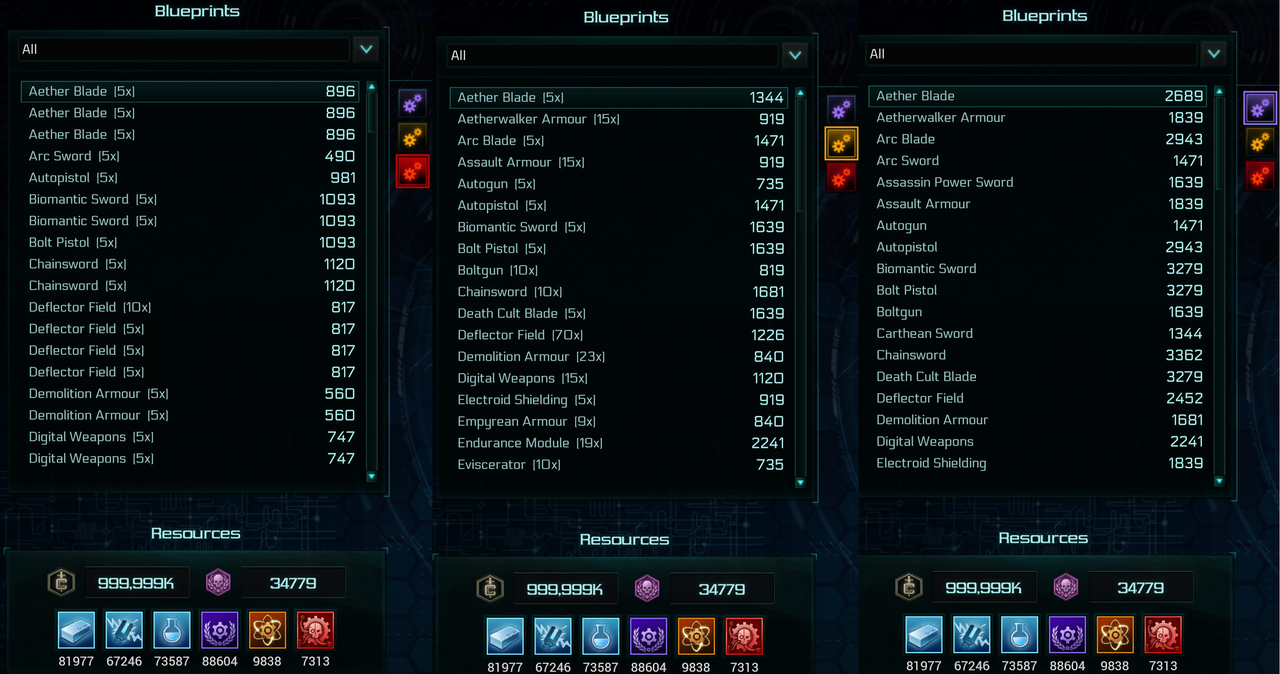 Currently sitting on that heap like Smaug, with nothing to use it on. Any plans for allowing the use of a few million credits to add a crit chance when crafting that would add a chance of producing a 90+ item? I could certainly use that for module crafting...

And finally: mechanicus random missions when?

This is a reasonable request which I forwarded to the dev team. Considering the changes would not take much time I think we can include the gas trap event in the condition which triggers the teleporting.

As for your other question: our main focus is the Sororitas DLC and the next Season coming with it so there will not be much time for the dev team to deal with existing issues.

There will be one particular fix coming out shortly which is the item loss problem in Co-Op usually at the end of Void Crusades. We attempted to fix this bug at least 4 times now and we give it another try.

If you can name any considerably major bug (which is not a sound bug either ^^ ) please name it and we might consider fixing it either before the Sororitas DLC release or shortly after that.

On the topic of QoL improvements and the change made in patch 2.6.0:

Could you also make this apply to the gas trap triggers? As soon as the little event triggers, the doors are considered locked and are impassable for the constructs, even if the closing animation has barely started. One example is in a VC mission, I add the mapinfo details here: 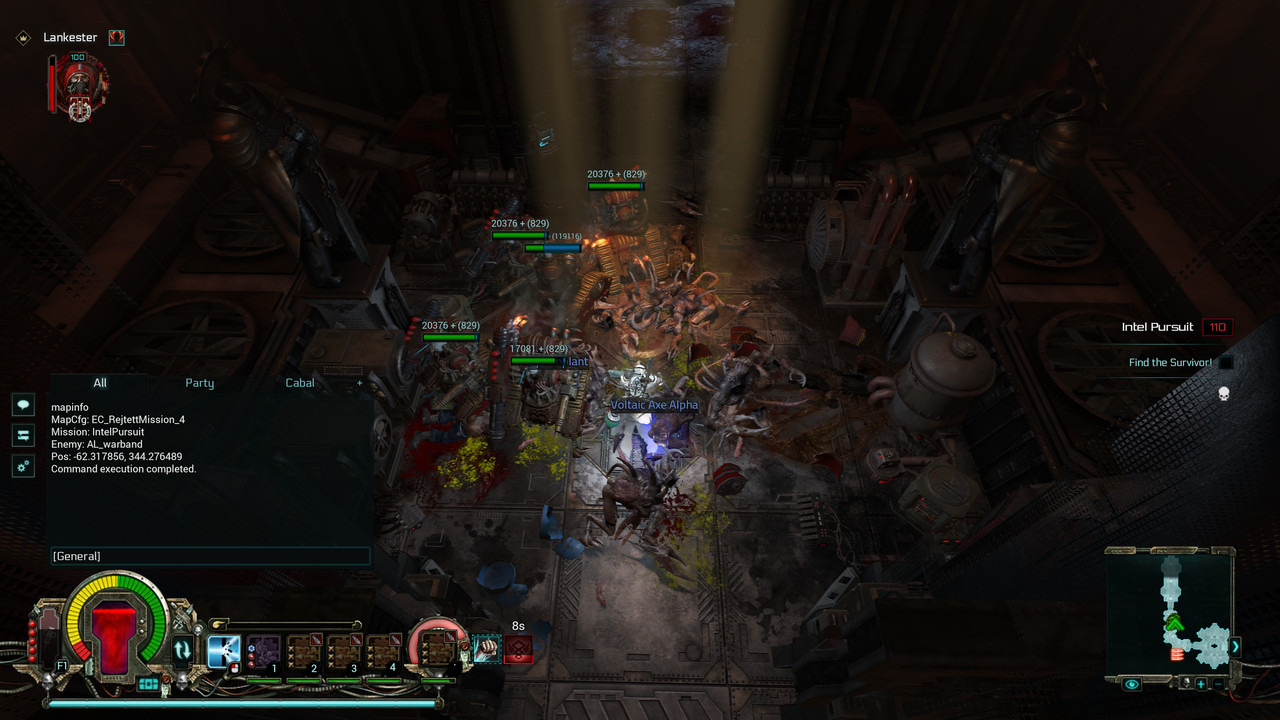 It's not much fun as a ranged TA on higher difficulties when your constructs are not there to do the heavy work (and eat the nasty shots)...

On a more general note, @MARCOPOLOCS‍ , could you advise (in broad terms) what we can expect in terms of general bug fixes and QoL tweaks for other classes once the Sororitas DLC arrives? Most of the balances that will be done are likely to be linked to the new class, its mechanics and interaction with weapons, but there are quite a few quite annoying bugs in other parts of the game that really need some looking into. Can we expect anything like that or will it not be the focus of the changes?

Godlike
Marcopolocs
85 5532
77 days ago
+0
0
Krisz
Please reinstall the game then on your device as other players can login without any issue and the servers are reachable.
1
AFedienko
0 8
80 days ago
+0
0

Dont know was that working before, but now  2 x "Conduit's Resonance" (50% of channeled skill damage is dealt in a 6m radius around the target) Laspistol's "Dual Beams" skill does no damage outside the beam.

this happens on Xbox Series X, and from Hungary